North Dakota, Here's To You

This summer, The Great American Folk Show featured the classic North Dakota song, “You Oughta Go Ta North Dakota,” by Lois Steele and Jack Fulton. That song, along with another composition — “North Dakota Here’s To You” by Leon C. Sorlien — were the finalists out of a total of 278 submissions in the North Dakota state song competition of 1958.

Sorlien’s song received 3,577 votes, and Fulton and Steele’s song received 1,877 votes from statewide service clubs. However, the competition's committee made the final decision — and in the end, they awarded first place to both songs.

Below, Tom Brosseau writes about the competition and about Leon C. Sorlien, who was a longtime Fargo Central High School music director. Tom also interviews Sorlien's former student, now 93 years old, about his memories of Sorlien.

"North Dakota Here's To You" by Leon C. Sorlien
Performed by the Fargo Kiwanis Club Warblers, 1958

In 1958, Greater North Dakota Association and the North Dakota Broadcasters Association held a song competition to uncover a "catchy, rouser-type North Dakota song." The sheet music for the competition's two finalists — "You Oughta Go Ta North Dakota" by Lois Steele and Jack Fulton, and "North Dakota Here's To You" by Leon C. Sorlien — was sent to presidents of all the local service clubs in the state. Club members were asked to sing each song and check off which one they preferred.

A short while later, the ballots were returned and tallied: Sorlien’s song received 3,577 votes, while Fulton and Steele’s song received 1,877 votes. But the committee would be the ones to make the final decision, and in the end, they awarded first place to both songs.

Sorlien was upset by this, and argued that he’d won the competition — and that it wasn’t even close. The committee’s response? They sent the two songs to the service clubs once again, and had them vote in a straw poll to gain an indication as to which song people favored. They said they chose a dual winner because neither song had a definite edge in quality. Sorlien declined to accept the prize of $25, and asked that his song be withdrawn.

I came across a two-cassette box set of Leon C. Sorlien’s music called Fargo Central High School and Leon C. Sorlien March On! It's comprised of 36 marches, rousers, and cheer songs — a very rare find. The liner notes detailed Sorlien’s background, his teaching career, and his contribution to music in North Dakota. He was more than just well-liked — he was adored and respected.

On top of music, he was passionate about golf, church, and Kiwanis Club. He was originally from Bode, Iowa, and his parents were from Norway. As I read through the liner notes and got a sense of who this man was, I started to appreciate just why he decided to enter a song into the competition in 1958. More than the glory of winning first place, second place, or any place, he was someone who loved getting people together, he loved creating community, and for him, music was the most delightful way to make it happen. But he was also a man of principle. If someone said they were going to do something, I get the feeling that Sorlien would hold them to it.

The box set was produced by the Fargo Central High School Alumni Association in 1987. I looked them up online and as it turns out, they’re still going strong. On the contact page, Christine Kloubec’s number was listed, and she answered the phone right away when I called. I asked if she knew anything about Sorlien, and she did, but she told me, “You know who you need to talk to is Jim Gompf. He was a pupil at Fargo Central High when Sorlien was a teacher. In fact,” she said, “I’ll call Jim now and see if he’d be interested in talking to you about Sorlien and call you back.”

A week later, there I was, sitting across from Jim Gompf at his senior living center in Fargo. He’s now 93 years of age, but sharp as a tack, and a true gentleman. Jim Gompf, incidentally, was the one who started the Fargo Central High School Alumni Association. He also knows anything and everything about Fargo. Hoping he’d be able to shed a bit more light into the character of Leon C. Sorlien, I asked what he remembered about him.

Leon C. Sorlien did much for the state of North Dakota, and Minnesota, too. He was the athletic coach and principal at Hankinson High School from 1921-23. Then, he headed the instrumental music program in the Bismarck Public Schools from 1923-26, before becoming the music director at Fargo Central High School until he retired in 1950. During that time, he also taught private lessons on Saturdays at the Concordia College Music Conservatory.

He was an individual who had fortitude, vision, will, patience, and principle. He passed away in 1993.

This feature from Tom Brosseau first aired on The Great American Folk Show. Listen to the show every Saturday at 5pm on Prairie Public, or find episodes online. 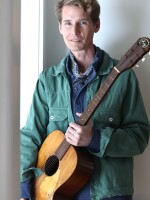 Tom Brosseau
Tom Brosseau is a folksinger and songwriter from North Dakota, and host of The Great American Folk Show on Prairie Public.
See stories by Tom Brosseau
Related Content