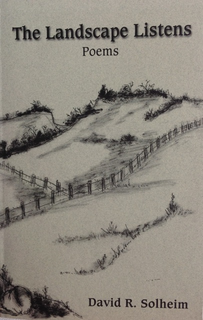 David Solheim's poem fit well into our 2022 Labor Day special. It has an epigraph, "Commissioned for Citizen's Day, 1 October 1989, in Minot, by the North Dakota Statehood Centennial Commission."

We found it in the anthology from NDSU's Press, North Dakota is Everywhere. NDSU found it in David Solheim's The Landscape Listens, published by Buffalo Commons Press, which also has more of his work. We appreciate his permission to use it.

Thanks to the Fargo-Moorhead Community Theatre for connecting us with readers Keith Schweigert and Dawn Gunderson. Keith Schweigert is an award-winning actor who has been in many productions at FMCT and elsewhere. He has also served on the group's Board. Dawn Gunderson has also made accomplished stage appearances, and is also known for her work in the schools as a drama teacher and director — she is recently retired from the Moorhead system.